This material is included in the back of at least one paperback edition of The Angel Experiment. As far as I know, it never actually ran on Fang's Blog, but it does tie into some entries from early 2006.

The scanned images appear first, followed by a transcript at the bottom of the page. I've indicated page breaks by page number in brackets. 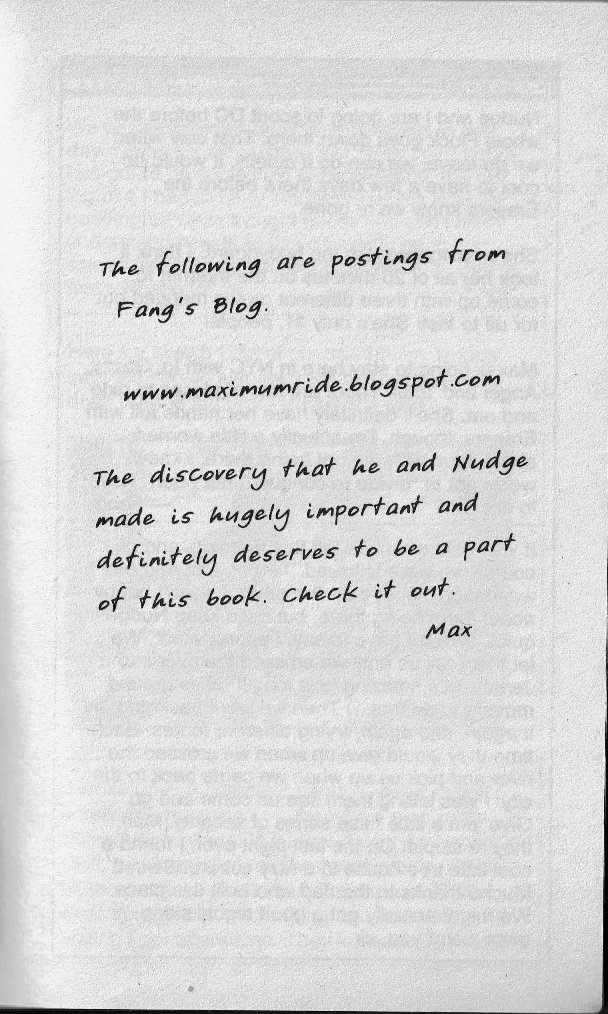 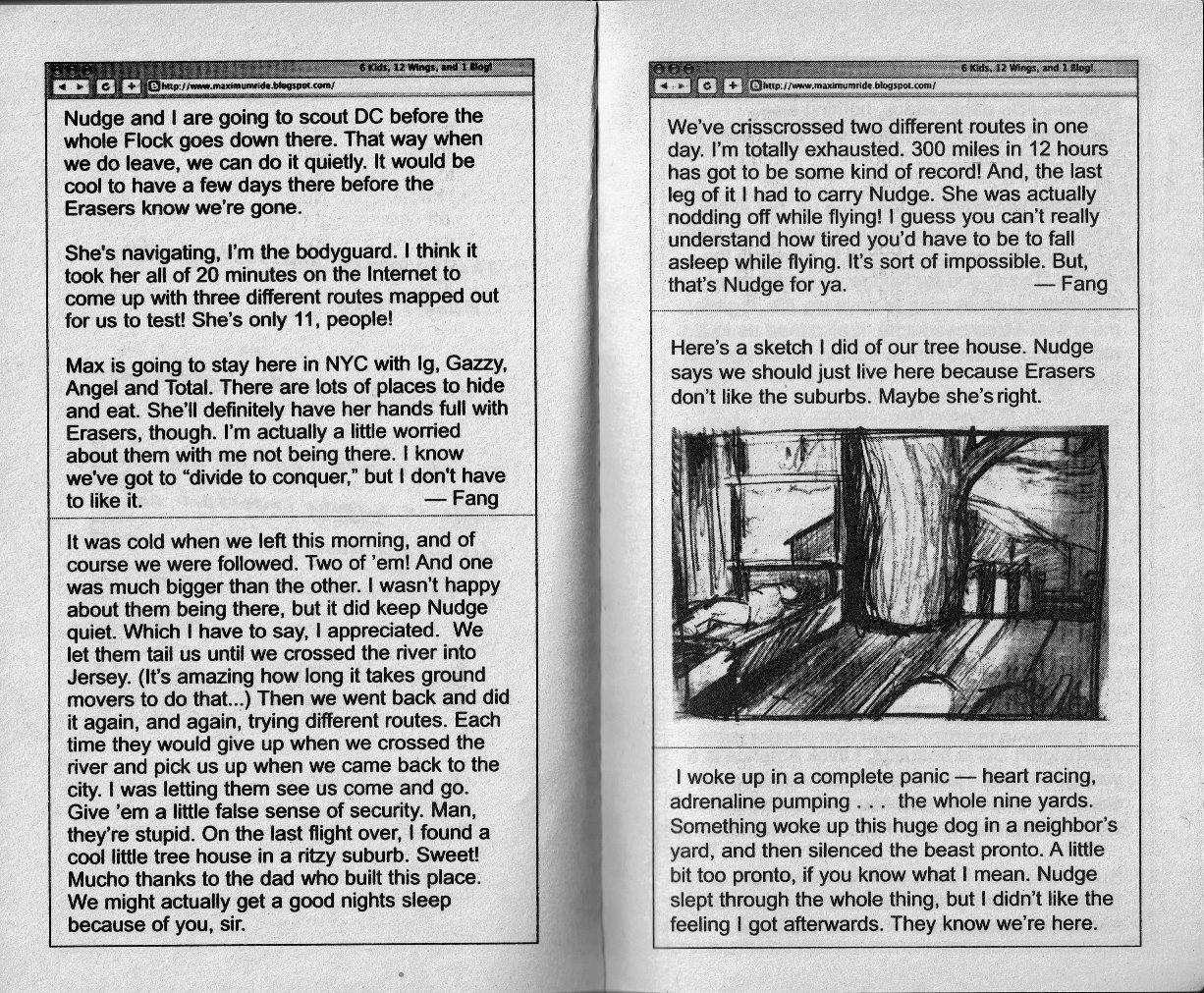 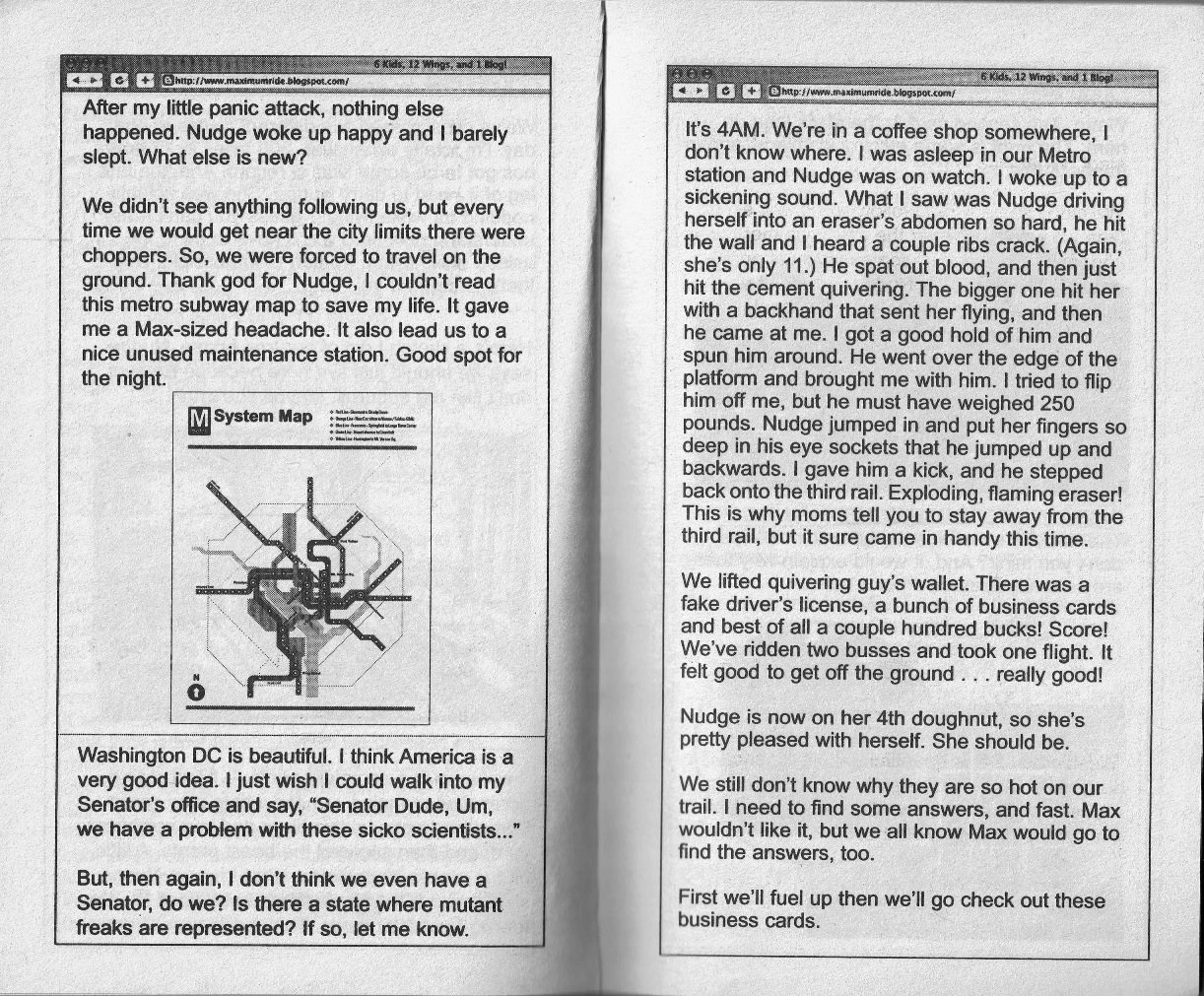 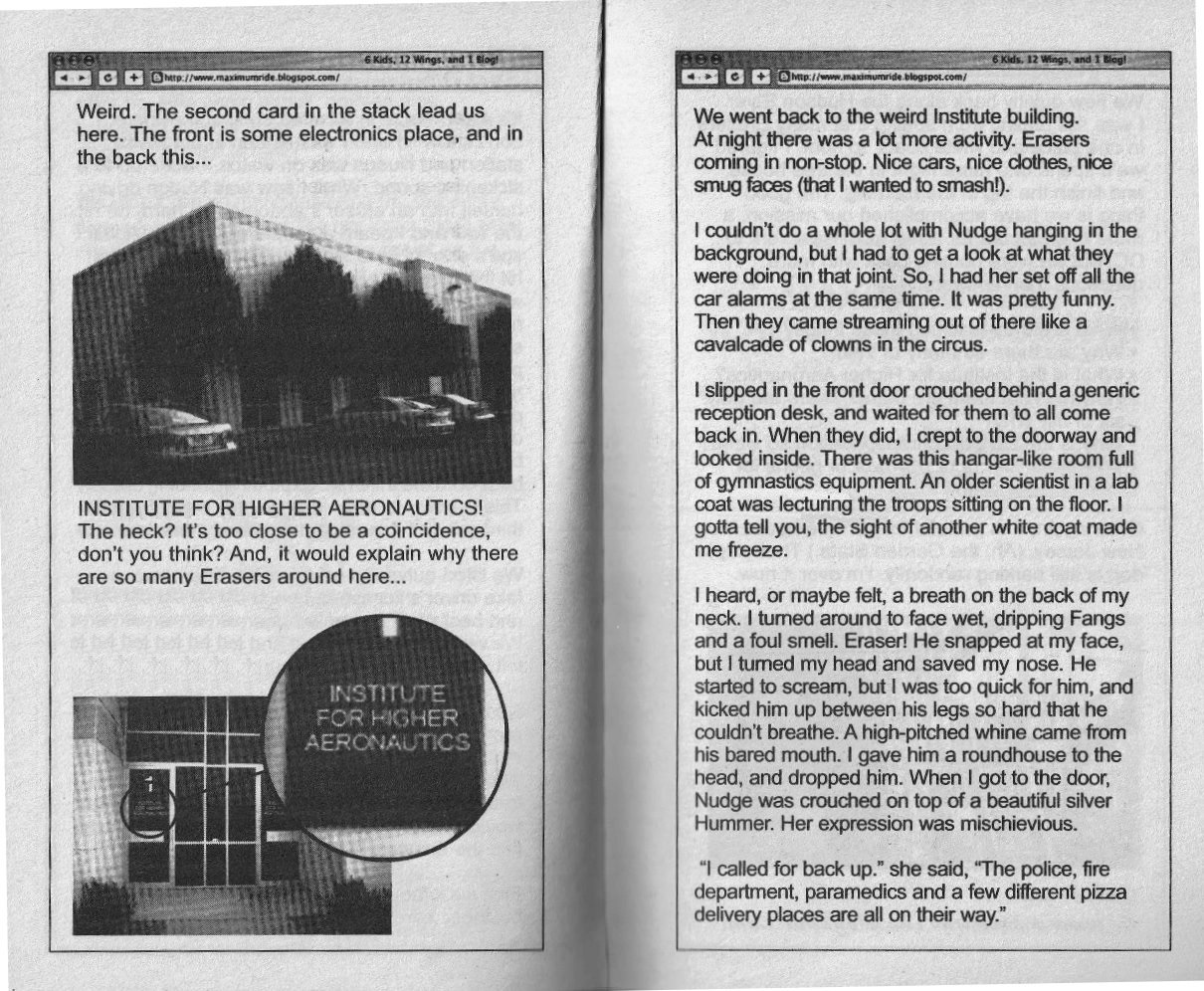 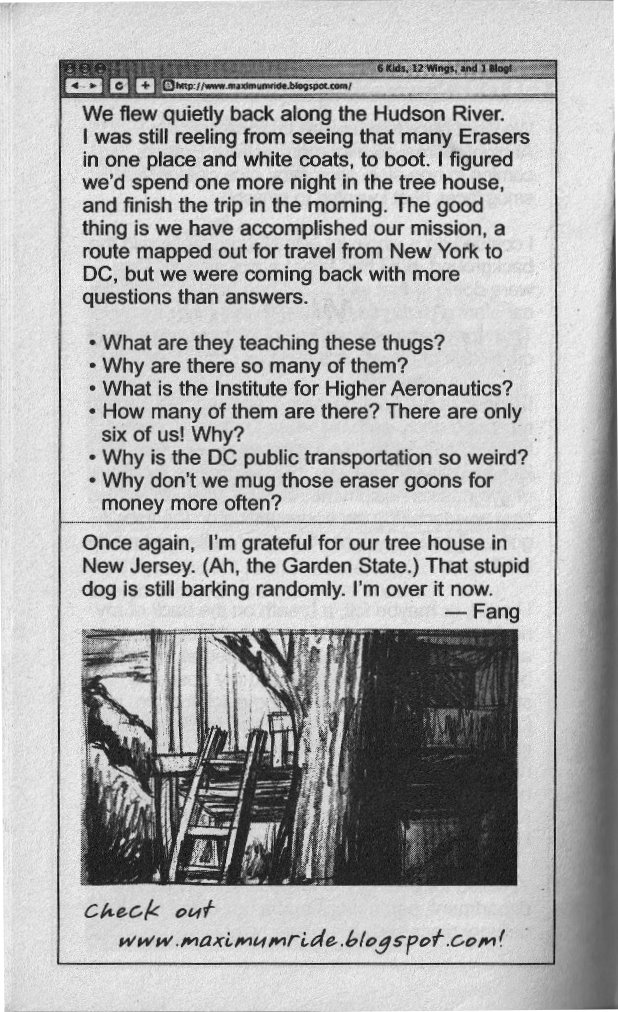 The following are postings from Fang's Blog.

The discovery that he and Nudge made is hugely important and definitely deserves to be a part of this book. Check it out.

Nudge and I are going to scout DC before the whole Flock goes down there. That way when we do leave, we can do it quietly. It would be cool to have a few days there before the Erasers know we're gone.

She's navigating, I'm the bodyguard. I think it took her all of 20 minutes on the Internet to come up with three different routes mapped out for us to test! She's only 11, people!

Max is going to stay here in NYC with Ig, Gazzy, Angel and Total. There are lots of places to hide and eat. She'll definitely have her hands full with Erasers, though. I'm actually a little worried about them with me not being there. I know we've got to "divide to conquer," but I don't have to like it. --Fang

It was cold when we left this morning, and of course we were followed. Two of 'em! And one was much bigger than the other. I wasn't happy about them being there, but it did keep Nudge quiet. Which I have to say, I appreciated. We let them tail us until we crossed the river into Jersey. (It's amazing how long it takes ground movers to do that...) Then we went back and did it again, and again, trying different routes. Each time they would give up when we crossed the river and pick us up when we came back to the city. I was letting them see us come and go. Give 'em a little false sense of security. Man, they're stupid. On the last flight over, I found a cool little tree house in a ritzy suburb. Sweet! Mucho thanks to the dad who built this place. We might actually get a good nights sleep because of you, sir.

We've crisscrossed two different routes in one day. I'm totally exhausted. 300 miles in 12 hours has got to be some kind of record! And, the last leg of it I had to carry Nudge. She was actually nodding off while flying! I guess you can't really understand how tired you'd have to be to fall asleep while flying. It's sort of impossible. But, that's Nudge for ya. --Fang

Here's a sketch I did of our tree house. Nudge says we should just live here because Erasers don't like the suburbs. Maybe she's right.

[Image: a sketch of the interior of a tree house. A bed is visible on the left side. In the middle is a large tree trunk. In the background, the roofline of a house is visible.]

I woke up in a complete panic -- heart racing, adrenaline pumping . . . the whole nine yards. Something woke up this huge dog in a neighbor's yard, and then silenced the beast pronto. A little bit too pronto, if you know what I mean. Nudge slept through the whole thing, but I didn't like the feeling I got afterwards. They know we're here.

After my little panic attack, nothing else happened. Nudge woke up happy and I barely slept. What else is new?

We didn't see anything following us, but every time we would get near the city limits there were choppers. So, we were forced to travel on the ground. Thank god for Nudge, I couldn't read this metro subway map to save my life. It gave me a Max-sized headache. It also lead us to a nice unused maintenance station. Good spot for the night.

[Image: a map of the Washington, DC metro system.]

Washington DC is beautiful. I think America is a very good idea. I just wish I could walk into my Senator's office and say, "Senator Dude, Um, we have a problem with these sicko scientists..."

But, then again, I don't think we even have a Senator, do we? Is there a state where mutant freaks are represented? If so, let me know.

It's 4AM. We're in a coffee shop somewhere, I don't know where. I was asleep in our Metro station and Nudge was on watch. I woke up to a sickening sound. What I saw was Nudge driving herself into an eraser's abdomen so hard, he hit the wall and I heard a couple ribs crack. (Again, she's only 11.) He spat out blood, and then just hit the cement quivering. The bigger one hit her with a backhand that sent her flying, and then he came at me. I got a good hold of him and spun him around. He went over the edge of the platform and brought me with him. I tried to flip him off me, but he must have weighed 250 pounds. Nudge jumped in and put her fingers so deep in his eye sockets that he jumped up and backwards. I gave him a kick, and he stepped back onto the third rail. Exploding, flaming eraser! This is why moms tell you to stay away from the third rail, but it sure came in handy this time.

We lifted quivering guy's wallet. There was a fake driver's license, a bunch of business cards and best of all a couple hundred bucks! Score! We've ridden two busses and took one flight. It felt good to get off the ground . . . really good!

Nudge is now on her 4th doughnut, so she's pretty pleased with herself. She should be.

We still don't know why they are so hot on our trail. I need to find some answers, and fast. Max wouldn't like it, but we all know Max would go to find the answers, too.

First we'll fuel up then we'll go check out these business cards.

Weird. The second card in the stack lead us here. The front is some electronics place, and in the back this...

[Image: A photograph of the back of a low, blocky one-story building. Three cars are parked in front of it. Three trees obscure most of the facade.]

INSTITUTE FOR HIGHER AERONAUTICS! The heck? It's too close to be a coincidence, don't you think? And, it would explain why there are so many Erasers around here...

[Image: A photograph of the entrance to a building. Two glass-paned doors are separated by windows. On the left, the number 1 appears above some text. Zoomed in, this text reads: INSTITUTE FOR HIGHER AERONAUTICS.]

We went back to the weird Institute building. At night there was a lot more activity. Erasers coming in non-stop. Nice cars, nice clothes, nice smug faces (that I wanted to smash!).

I couldn't do a whole lot with Nudge hanging in the background, but I had to get a look at what they were doing in that joint. So, I had her set off all the car alarms at the same time. It was pretty funny. Then they came streaming out of there like a cavalcade of clowns in the circus.

I slipped in the front door crouched behind a generic reception desk, and waited for them to all come back in. When they did, I crept to the doorway and looked inside. There was this hangar-like room full of gymnastics equipment. An older scientist in a lab coat was lecturing the troops sitting on the floor. I gotta tell you, the sight of another white coat made me freeze.

I heard, or maybe felt, a breath on the back of my neck. I turned around to face wet, dripping Fangs and a foul smell. Eraser! He snapped at my face, but I turned my head and saved my nose. He started to scream, but I was too quick for him, and kicked him up between his legs so hard that he couldn't breathe. A high-pitched whine came from his bared mouth. I gave him a roundhouse to the head, and dropped him. When I got to the door, Nudge was crouched on top of a beautiful silver Hummer. Her expression was mischievious.

"I called for back up." she said, "The police, fire department, paramedics and a few different pizza delivery places are all on their way."

We flew quietly back along the Hudson River. I was still reeling from seeing that many Erasers in one place and white coats, to boot. I figured we'd spend one more night in the tree house, and finish the trip in the morning. The good thing is we have accomplished our mission, a route mapped out for travel from New York to DC, but we were coming back with more questions than answers.

Once again, I'm grateful for our tree house in New Jersey. (Ah, the Garden State.) That stupid dog is still barking randomly. I'm over it now. --Fang

[Image: A sketch of the exterior of the tree house. An entrance ladder is visible in the middle left. To its right, the tree trunk takes up most of the middle of the image.]