We made more content than we ended up using; this page is for things we created that I'm not 100% positive made it into the ARG proper.

Transcripts appear further down the page. 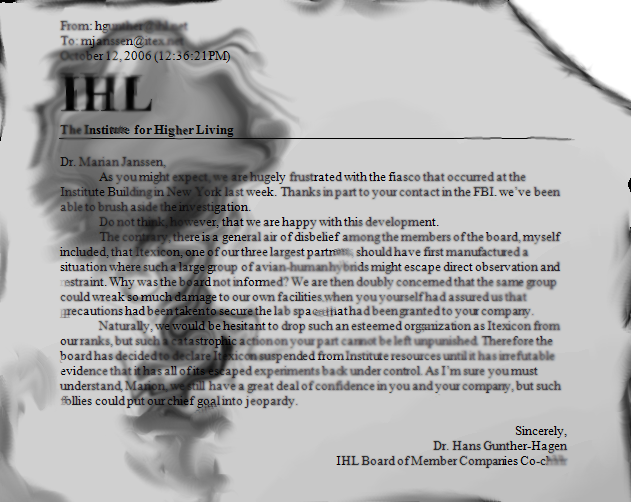 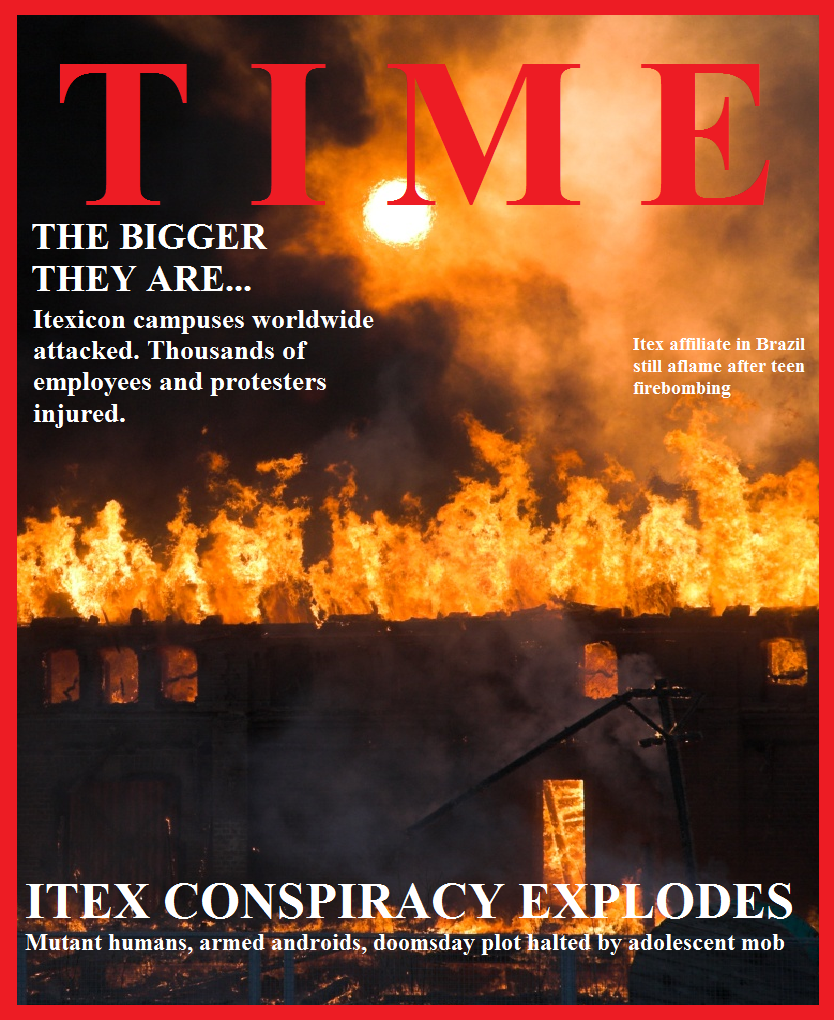 Half of a scene featuring Jeb and young Max. 4.1 MB.

Marian Janssen (1.4 MB) and Jeb Batchelder (1.5 MB) in a brief conversation based on the opening of the third book.

One: Itex Worldwide company logo. The words "ITEX WORLDWIDE" appear inside a black circle. A smaller grey circle intersects with this circle. Trivia: this logo comes from marketing materials for the second book, but was cleaned up by EndOfTheEarth on the ARG team.

Two: A water-damaged version of this email. Email text:

As you might expect, we are hugely frustrated with the fiasco that occurred at the Institute Building in New York last week. Thanks in part to your contact in the FBI, we've been able to brush aside the investigation.

Do not think, however, that we are happy with this development.

The contrary, there is a general air of disbelief among the members of the board, myself included, that Itexicon, one of our three largest partners, should have first manufactured a situation where such a large group of avian-human hybrids might escape direct observation and restraint. Why was the board not informed? We are then doubly concerned that the same group could wreak so much damage to our own facilities when you yourself had assured us that precautions had been taken to secure the lab space that had been granted to your company.

Naturally, we would be hesitant to drop such an esteemed organization as Itexicon from our ranks, but such a catastrophic action on your part cannot be left unpunished. Therefore the board has decided to declare Itexicon suspended from Institute resources until it has irrefutable evidence that it has all of its escaped experiments back under control. As I'm sure you must understand, Marion, we still have a great deal of confidence in you and your company, but such follies could put our chief goal into jeopardy.

Three: We used a slightly-altered version of this late in the ARG. A TIME magazine cover, undated. Cover image: a building in flames. Cover text:

THE BIGGER THEY ARE...

Four: Jeb tests younger Max's vision. The audio only contains Jeb's lines, but Max's were recorded at some point. Transcript:

JEB: OK Max, here's what we're going to do. At the end of the hall, a bunch of numbers are going to show up on that screen. Do you see it?

MAX: It's really far away.

JEB: I'm going to put up a letter. Can you see it?

JEB: Good, how about this one?

JEB: Great job. How about now?

MAX: There's nothing on the screen.

JEB: Yes, there is. It's right in the middle.

MAX: If I tell you, can I have a cookie?

Five: Two audio files, containing a short conversation based on the beginning of the third book. (Marian; Jeb). It's possible that these were edited together at some point, but I only have these files. Transcript:

(Audio track salvaged from a video call circa the beginning of December 2005. Most of the tape was damaged but the following fragment remained.)

JANSSEN: Dr. Batchelder, the ONLY loose ends NOT tied up are your obnoxious, uncontrollable FAILURES. You begged us to wait until their preprogrammed expiration date kicked in. But you no longer have that luxury, no matter how soon it will happen. Get rid of those loose cannons NOW, Dr. Batchelder. Do I make myself clear?

JEB: I understand. They'll be taken care of.

JANSSEN: You show me proof of termination of those MISTAKES by oh seven hundred tomorrow, or YOU will be the one to be terminated. Understood?

JEB: Yes. (clears throat) Everything is in place, Madame Director. They're just waiting for my signal.

JANSSEN: Then give them the signal. When you arrive in Germany, this foolishness must be OVER. There is NO time to waste.

Six: A humorous elaboration on item forty-one, an undated Itex Worldwide internal memo concerning property damage caused by the flock. This wasn't intended to be used in the ARG, but was written as part of the planning, so I've included it here. Transcript:

UPDATE RE. PROPERTY DAMAGE -- EYES ONLY! THIS MEANS YOU!

After being accosted in the halls and receiving an unusual influx of emails, it has been decided that release of the exact types of property damage caused by Delta group would be highly prudent if it gets people to stop hunting me down.

Up to the current date, members of Delta group have caused multiple incidents of damage to Itexicon property. You asked for the list, so here it is, all of it:

- Injuries incurred to Eraser team Gamma during retrieval attempt. Fortunately, recovery was fast, given that most injuries consisted of bruises and sprains. As one medical staff put it, this incident caused us to underestimate Delta group's fighting ability by making their abilities appear to be "weaksauce".

- Youngest subject provoked Dr. Reilly by repeatedly insulting him, his mother, and his chosen profession when Dr. Reilly attempted to obtain a blood sample. Dr. Reilly was reprimanded for striking the subject, and has responded well to antibiotics, causing medical staff to believe that he may be able to keep his hand. (No, you may not see the tapes, and yes, this is why you are required to report any injuries incurred on duty.)

- Psychological damage to leader of Eraser team Gamma, as well as minor injury to remaining members of team, consisting of cactus lacerations and fractured pride.

- Lacerations to leader of team Gamma, as well as other members of the ad-hoc team he had been reassigned to while the rest of Gamma received treatment.

- Cosmetic injury (bruises, teeth knocked from socket) to two employees. One broken jaw. One concussion. Severely fractured ribs. All personnel advised to either arm themselves during further interactions with any member of Delta group, or to simply not get in their way.

- Loss of approximately half a billion dollars in subjects from the New York facility.

- Cervical fracture and further psychological trauma incurred by the leader of team Gamma. Luckily, medical help arrived on scene within minutes after Delta group had left, and we managed to avoid losing a prize subject.

- Minor injuries incurred by team Gamma, who had just returned to duty. It appears they had failed to learn from team Beta's mistakes... or from their own.

- Total destruction of parking garage at Death Valley facility, including wholesale destruction of company-owned vehicles, as well as collateral damage to the facility itself.

This disregards the property damage group Delta incurred to other companies or individuals, and the considerable public havoc they created.

Now, the next person to ask me why they can't keep just one member of Delta alive will be fired. You know what they can do. Don't be stupid.

Go back to the main ARG page.